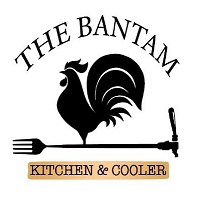 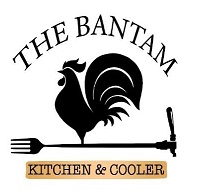 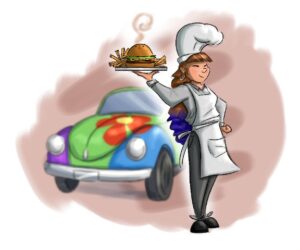 Hannah escapes the stress of her two loving but messy roommates by falling into Bob Ross daydreams. She does her best cooking while belting out 90’s era Disney tunes. She likes happy clouds and Volkswagen Bugs. Her superpower is that she’s the co-owner of a restaurant at the ripe old age of 22. After a homeschooling career, she embarked on her culinary journey at Shasta College and never looked back. She met Kate while honing her skills in Lake California and now she’s ready to win over Redding, one shrimp po’ boy at a time.

Kate has convinced her customers that she is an independent, earth-scorching drink tender, though she’s actually in a semi-typical marriage and badass mom of three. Her identical twin boys were the greatest shock of her life but all her kids are her greatest source of pride: she’ll never mention it cause she wants you to think she’s in a biker gang and open-carries ninja-stars and white claws. She’s been slinging drinks and crude jokes for over a decade. She’s been known to teach group workout classes and shock people with her lifting ability and boundless energy. If you go to war, take her with you.

Joe likes to cook for you and doesn’t like sharing information about himself in this context. He likes bourbon and avocados. Give him one of each and he won’t shut the heck up.